The Firevase campaign from Samsung Fire & Marine Insurance created by Cheil Worldwide has successfully impacted home fire safety in Korea by raising awareness of the issue and encouraging more households to have a fire extinguisher in their homes, the brand said in an announcement today accompanying a case study.

The Firevase campaign from Samsung Fire & Marine Insurance created by Cheil Worldwide has successfully impacted home fire safety in Korea by raising awareness of the issue and encouraging more households to have a fire extinguisher in their homes, the brand said in an announcement today accompanying a case study.

The campaign worked off the market insight that more than 10,000 residential fires occur in Korea every year but, despite knowing the immense benefits of having a fire extinguisher, along with the recently passed law requiring all homes to have one, a study showed that 58 percent of households still did not have one as of 2017. The study also revealed that people who did have fire extinguishers at home stored them in hard to reach places or forgot about them entirely.

To address the problem, Cheil Worldwide designed a product called “Firevase” which ingeniously disguises an extinguisher as a beautiful vase of flowers that looks great placed anywhere in the house.

Firevase is also easier and safer to use than regular powder-type fire extinguishers. Users can put out a residential fire simply by throwing the vase into the fire. The exterior is made of up two layers and holds a non-irritating extinguishing agent made from rigid PVC for safety. The Firevase is designed to explode when it contacts the fire, releasing potassium carbonate to start a rapid cooling reaction that suppresses oxygen and smolders the fire.

Here is a demonstration of the Firevase in action:

Cheil came up with the unique and innovative Firevase campaign to help people realize the effectiveness of having a fire extinguisher at home as the first line of defense against residential fires. Beginning on September 1st, it distributed 100,000 Firevases to customers, including to those who lived in areas designated by the Korean Government as “fire-prone,” such as traditional Korean villages. 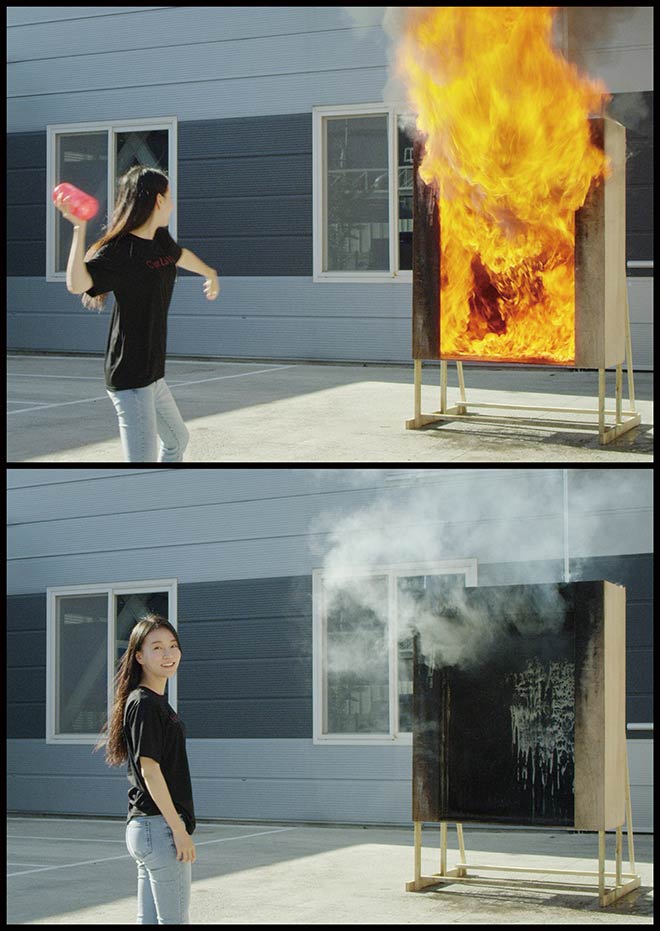 Airing on digital and offline channels, the campaign featured a video of a celebrity who used the Firevase to put out a fire. The same video was screened in movie theatres. Offline, print ads ran in 46 newspapers and magazines. The four-month campaign resulted in 32 million impressions on a variety of media platforms and Samsung Fire & Marine Insurance website visits totaled 4.1 million. Awareness of the importance of having a home fire extinguisher reached 81 percent and the number of homes newly equipped with a fire extinguisher increased eight percent nationwide.

Satisfied by the efficacy of the campaign for raising awareness and the response from citizens and media, Samsung Fire & Marine Insurance is now planning to ramp up production and deliver more Firevases to the marketplace.

“The idea behind Firevase is simple: raise awareness to the very important public safety issue of home fire safety while drawing a direct line between that effort and Samsung Fire & Marine’s fundamental brand philosophy of always nearby and always good,” said Oh Hyung-kyun, a creative director with Cheil Worldwide.

“We’re very proud of this accomplishment because it shows that brands can play an important role in raising public awareness to important issues and affecting behavior change.”

The campaign won the Grand Prize for the Design category at the 2018 Korea Advertising Awards.